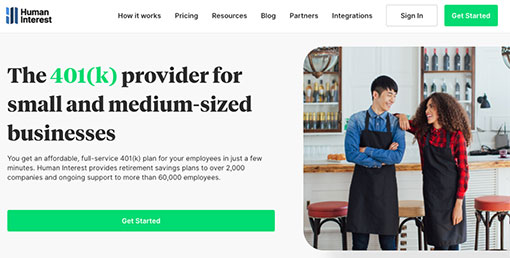 I co-founded Human Interest, a digital 401(k) provider. Small and medium-sized business can set up a 401(k) plan online in minutes, and ongoing administration is completely automated.

Human Interest has raised $330+ million in funding since graduating from Y Combinator. It serves as the 401(k) provider for nearly 10,000 businesses.

I co-founded Thunder, which makes design software used by brands and small businesses to create, customize, and test their digital ads.

The company was acquired by Walmart.

Thunder was named one of Forbes’ 100 Most Promising Companies in America in 2011, and was described as “An Ad Engine to Put Mad Men Out of Business” by the New York Times.

As a side project I created Job Change Notifier, a free service that sent you an email alert whenever one of your LinkedIn connections changed jobs. Salespeople, startup founders, and recruiters used it to stay up to date on their professional network and uncover new business opportunities. Job Change Notifier helped users track job changes for over 20 million connections (almost 10% of LinkedIn’s user base)

Built off the LinkedIn API, the website was featured in TechCrunch and Mashable. Unfortunately, LinkedIn made a change to its API policy that caused me to shut down the service.

As a teenager, I co-founded the SubProfile Network, a group of highly popular teen-oriented websites with 7 million unique visitors and 20 million pageviews per month. It owned 3 of the top 10 most visited websites by teens in 2003.

Our flagship website was SubProfile.com, an early social network built on top of AOL Instant Messenger.